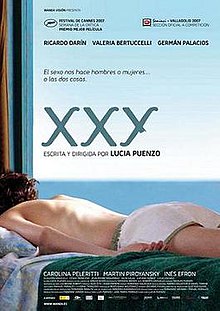 Alex, a young intersex person who has been raised female, lives with her mother, Suli, and her father, Nestor, in a small village on the Uruguayan seaside. (The movie uses female pronouns for Alex, so I do too.) When Alex reaches the age of 15, Suli invites some friends from Argentina to visit. What Alex's father doesn't know is that the husband of Suli's friend is a well-known surgeon known for doing sex-change surgeries. Suli has asked them to come as a secretive consultation about Alex.

Meanwhile, rumors about Alex's unusual genitals (she has both male and female reproductive organs) are starting to spread - started, it seems, by her former best friend. Before the start of the film, she had confronted him about it and broken his nose, leading her to be suspended from school. As Alex is walking along the beach, a group of bullies arrives and assaults her. They pin her down and open her shorts to reveal her genitals. She is only saved from being gang raped by the arrival of her former best friend, who had realized what was happening and arrives to help.

In the aftermath of this sexual assault, Alex must choose whether to tell her story to the police or continue to hide who she is. What will she decide?

This movie is a wonderfully nuanced examination of the issues that intersex individuals can encounter. Specifically, two aspects of intersex people's experiences are explored in great detail: the physical and the social.

The physicality of intersexuality


At the root, intersexuality is a biological phenomenon. Not fitting into the dominant ideas about the body or gender is painful to experience and painful to watch a loved one go through. For this reason, many intersex people have had genital normalizing surgery as children, or have been made to take various drugs to make them appear more feminine or more masculine. The problem with these procedures is that they are usually not chosen by the intersex person, but by their parents or guardians. Alex's father, Kraken, is resistant to performing any kind of surgery on his child. In fact, the family moved to this distant location on the coast of Uruguay to get away from the pressure to make her undergo surgery. Alex has been prescribed hormone pills, but has stopped taking them.

These are encouraging signs for Alex's physical and psychological well-being, as noted by the friendly neighborhood intersex person that Nestor consults. In his childhood, he had been subjected to numerous surgeries to normalize his female appearance - which affected his psychological well-being, since he later chose to present as male. He assures Nestor that Alex will be ok, whatever she - or he- decides.

Even without surgery or medication, Alex feels a need to align with the standard definition of femininity. When she seduces Alvaro, for example, she warns that she doesn't have very big breasts, in the hope that he won't be disappointed. She asks this even though she then acts as the penetrating partner.

When she is sexually assaulted, Alex's unusual anatomy becomes the focus of the abuse. Her attackers specifically say that they want to see whether she has a penis. It is her different physiology that makes her a target, perhaps even more so than if she had been a "normal" teenage girl? (I am curious about whether they would have attacked her if she had been raised as a boy. Probably not.)

The social aspects of intersexuality


The bigger question is: How does it feel to have to lie to everyone your whole life? Alex has kept this huge secret for her whole 15 years. It's something that is intrinsic to her concept of self - both because the secret itself is about a basic part of her, and because she is used to keeping it hidden.

When she finally tells someone, she chooses to reveal it to her best friend. Although we don't know exactly what happened, it seems that he reacted in a negative way, including (probably) revealing it to others. Alex then responds in the only way she feels she can, by breaking his nose. It is probably through this former friend that the rumors started, leading to her sexual assault.

But at this point, it seems, Alex has had enough of hiding and lying. She decides that she will report the sexual assault to the police. She no longer cares about who knows about her intersexuality; it is a part of her, and she wants to be open about it and learn how to live with it. This is true about her gender as well; rather than being forced to choose one or the other, in the end she decides not to choose at all. She wants to live as she is naturally, rather than having to fit into society's ideas of who she should be.


This film is so claustrophobic - the claustrophobia of small-town life and of being in the closet about a vital part of yourself. This claustrophobia rubs off on the viewer, giving you a chance to share Alex's feelings. The pacing is a bit slow, but this serves to increase the discomfort and unease. Overall, I thought this movie was a brilliant look at the lives of intersex people, who need more exposure to help others understand what they go through. Recommended for everyone.

XXY can be viewed on Hulu for free, is streaming on Amazon Prime (US), or can be purchased from Film Movement (US), Amazon US and  Amazon UK.

"What is intersex?" from the Intersex Society of North America
"Intersex 101," "9 Ways Intersex Youth Want You to Support Them," and "What Does It Mean to be Intersex" from Everyday Feminism
"XXXY," a short documentary from 2000 on intersexuality available on Vimeo