An elderly folk singer is arrested for political reasons. What follows is an intimate look at the Indian legal system from the perspective of the three main participants: the defending attorney, the prosecutor, and the judge.

This film won Best Feature Film in the Indian National Film Awards and was India’s official entry for the Academy Awards.

Not a “Courtroom Drama”


I was rather disappointed when I first saw this film, and I think the main reason was its advertising as a “courtroom drama.” I was expecting it to be similar to great “courtroom drama” films like 12 Angry Men or To Kill a Mockingbird. But it isn’t like that at all.


Read more »
Posted by Chelsea at 11:51 PM No comments: Links to this post

INTERVIEW: Indra Das on his debut novel The Devourers 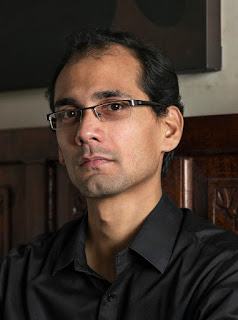 Indrapramit (Indra) Das is an author from Kolkata, India who writes in the fantasy/science fiction genres. I reviewed his debut novel The Devourers when it came out in India last year. Indra is now working as the Speculative Fiction editor for Juggernaut Books, a new publishing company focused on mobile content. I caught up with him after his publicity tour for the US version of The Devourers, published last month by Del Rey.


I know you just finished your US publicity tour for The Devourers. How did it go?


It went very well indeed, thank you for asking! I went to New York City for the launch, and met my American editor, Mike Braff, along with the entire team behind the book’s publication, promotion, etc. at the Del Rey / Penguin Random House offices. I had a lovely time with them all, and they held a gathering for me at a bar with free copies of the book for the launch. Then I joined them at San Diego Comic-Con, where I was on a couple of panels, and had three signings, and generally promoted the book at the Del Rey booth on the Con floor along with other writers published under the imprint. From there, I went to Seattle for a couple of readings at the University Bookstore and the Two Hour Transport reading series at Café Racer. And finally, Vancouver for one night for a reading at my favourite bookstore there, Pulpfiction Books. It all went so well (thanks greatly to the heroic efforts of the Del Rey team, and the generosity of my friends in all three cities), Comic-Con was as marvelously brain-frazzling as reputed (we sold out all copies of The Devourers at the Del Rey booth), and the panels and signings went better than I could have hoped. None of which necessarily says anything about the future of the book’s long-term cultural impact or sales, but it was a lovely start.

Have you noticed any differences between the novel’s reception in India and the US?


Absolutely. The book is doing decently for a debut in India, but it’s not had much of a cultural impact, with not many writers or publications talking about it or writing about it (I am of course eternally grateful to the writers and publications who did). It got good reviews, certainly, but I didn’t get the impression that cultural gatekeepers were very interested in looking past the pitch - ‘werewolves in India’— to talk about it as a cross-genre novel rather than declare ‘oh hey, another Indian fantasy novel, those are pretty rare, right?’ and leave it at that.

Read more »
Posted by Chelsea at 1:58 AM No comments: Links to this post

The Three-Body Problem by Cixin Liu, translated by Ken Liu

Caught up in the chaos of the Cultural Revolution, astrophysicist Ye Wenjie finds herself working for a secret government project after her father is brutally murdered for being an "intellectual." What should she do when she discovers the first sign of intelligent alien life?

In the present, Wang Miao is a researcher working on nanomaterials who is pulled into a secret government investigation of an international organization called the Frontiers of Science. Strange things begin happening - things that seemingly break the laws of physics. His one major lead is the online virtual reality game called Three Body, which seems to hold some of the answers he is searching for.

The scientific problem and the virtual world


Probably the most unique part of this book is the integration of virtual reality with the main storyline. While Wang Miao initially plays as part of the investigation, he soon becomes fascinated by the game for its own sake: it poses a complicated physics puzzle that appeals to his scientific mind.

Read more »
Posted by Chelsea at 9:32 PM No comments: Links to this post