The Last Lover by Can Xue, translated by Annelise Finegan

This book traces the (possibly) intersecting lives and stories of a group of people who are related through work: a man who just wants to disappear into books, his maybe-magical wife, his gardener son; his cheating boss and his boss's distraught wife; a client who owns a rubber plantation and his lover, and so on. As the book goes on, their stories become more and more confused and begin to run together until everything seems unreal.

I did not understand or like this book, and I was surprised that it was nominated for the 2015 IFFP. According to the Goodreads ratings and the opinions of the other Shadow Panelists, it seems that people either really like this book or they really don't. I would be one of the latter. I kept expecting someone to wake up and have the whole thing be a complicated dream, but no such luck. I was just as confused after reading the whole thing as I was at the beginning. I get that this is (probably?) the point, but it's not something that I enjoy.


Something that bothered me was the weird Orientalism present throughout the book. While the main characters are all from some unnamed Western country, the knowledge that they hope to find comes from the East. This includes the ending when all (?) of the characters wind up traveling throughout the East looking for some sort of knowledge (?). There is also a strange woman who apparently sleeps with all (?) the male characters and who is apparently from some sort of Oriental country. I was surprised to see this weird Orientalism in a Chinese novel. Maybe it's satirical? Since I didn't understand the book, maybe I also didn't understand the satire? It would be great if someone could explain it to me.

All and all, something that you might like if you're interested in really dreamy, avant-garde, far out stuff. Not something I am interested in at all. But one of the other Shadow Panelists mentioned that the author's short stories are good, so maybe I'll see if I like those better at some point.

The Last Lover can be purchased from Amazon or wherever books are sold. A sample is available from Amazon here.

Posted by Chelsea at 10:22 PM No comments: Links to this post

The Giraffe's Neck by Judith Schalansky, translated by Shaun Whiteside 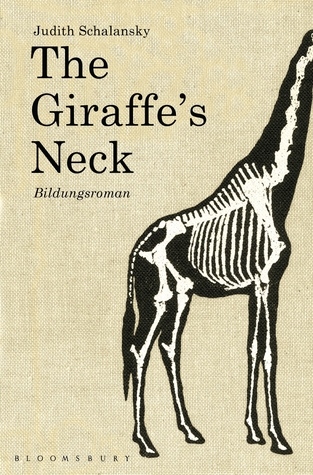 In this darkly humorous book, an old-school (East German) biology teacher analyzes everything in terms of Darwin's theory of evolution. Despite the diminishing number of students and the new educational plans, she remains stolidly in her lifelong habits of inducing fear and respect in class.

How will Frau Lomark survive in a changing world?

This book is described as a Bildungsroman, a novel dealing with character formation, formal education, or a coming-of-age story. (Thanks to Stu at Winstonsdad's blog for pointing out the importance of this term in his review of The Ravens.) However, I have some doubts about the applicability of that term to this story.

Because of my deep love for lists, I decided to put together a compilation of the reviews for each IFFP book written by members of the panel. I'll keep this updated as we go along.

I have followed the order of the shadow panel blogger list from the official page on Winstonsdad's blog.

By Night the Mountain Burns by Juan Tomas Avila Laurel

Read more »
Posted by Chelsea at 9:29 PM 3 comments: Links to this post

Email ThisBlogThis!Share to TwitterShare to FacebookShare to Pinterest
Labels: IFFP 2015

The Ravens by Tomas Bannerhed, translated by Sarah Death

Trigger warning for discussion of mental illness, anxiety, depression, self harm, and suicide.

A poor farming family in Sweden tries to cope with the father's rapidly increasing mental illness, especially his anxieties about losing their crops and animals. Meanwhile, his young teenage son Klas feels stifled by the expectation that he will take over the farm when he's old enough. Klas is very intelligent and would like to do anything other than farming, but he is wracked with guilt over his dislike for the family occupation. He finds solace in reading about and experiencing the natural world, especially in birdwatching. But as his father sinks deeper into depression, will Klas be able to adequately cope with the familial pressures and guilt that he encounters?

The Ravens is an incredibly realistic exploration of mental illness. In fact, it was so close to what I have experienced while dealing with my own mental illness that it was difficult for me to finish. The following review discusses both my own experiences and those described in the novel.

Read more »
Posted by Chelsea at 12:40 AM No comments: Links to this post

Mosquito and Other Stories by Premendra Mitra, translated by Amlan Das Gupta

"Yes, I once killed a mosquito."

We were astounded - not because Ghana-da wouldn't let even mosquitos alone, but at his unbelievable modesty. If mosquitos had to be killed at all, how could it be that Ghana-da had killed just one?

Shishir summoned up his courage and asked, "You killed one mosquito?"

"Yes, I've killed only one mosquito in my whole life," Ghana da said leaving us speechless, and that was on the Sakhalin island, on the fifth of August, 1939!


Ghana-da is a resident of a boarding house in Kolkata, but his history is much more exciting if you listen to him. Whenever the residents engage in adda, the Bengali art of having conversation for hours, Ghana-da is the main attraction. Sitting in his reserved comfy armchair, "borrowing" yet another cigarette, Ghana-da spins tales that are taller than tall, that can't be real - except, if they didn't happen, then how does he know all these details?

His tales encompass fantastic geographic descriptions, adventure stories, thousands of languages, mad scientists, and other exciting characters, both friend and foe. This volume is a collection of 12 short stories from Premendra Mitra's Ghana-da series.

Read more »
Posted by Chelsea at 1:12 AM No comments: Links to this post

IFFP shadow panel and other news

Just writing a quick note to say that I am back from traveling (at least for the moment!), and have a bunch of good things in store for the next month or so.

First, I will be participating in the Independent Foreign Fiction Prize shadow jury this year. This prize honors the best work of fiction by a living author that has been translated into English and published in the UK in 2014. To read more about the prize, judges, and longlist, see here.

The shadow jury is a group of bloggers that will read the books on the official longlist, write reviews, and choose our own shortlist and IFFP winner. I am excited to participate in this project, and look forward to the opportunity to read a wide range of translated literature. You can find out about the members of the shadow jury and keep track of our progress here. Follow us on twitter to find out more about what we're up to!