Hello to all my readers! I don't usually do this, but today I wanted to write something personal.

I came back to the US just over a week ago, for the first time in a year and a half. This explains why I haven't posted in nearly a month: I was preparing to travel 24 hours to visit my family without telling my grandparents.

After giving them the shock of their lives (and hopefully the best surprise they've ever had), I have spent the rest of the time here working, shopping, hanging out with my family, etc. etc. But while I've been here, I've noticed something disturbing but not surprising.

Intolerance seems to have increased while I've been away. I'm sure we all know who is responsible for some of this (hint: his name rhymes with Drumph), but it seems to be much farther-reaching than that.

This observation has made me reflect on why I am doing all of this. Why am I keeping this blog? Does anyone actually read my posts? Who cares about international literature and film?

My answer is: if even one person reads these reviews and learns something new, or wants to watch a movie or read a book they would never have considered before, then it's worth it for me. In my own small way, I'm trying to combat the intolerance I see around me. I am trying to foreground the books and movies made by people from around the world, who may have a different worldview from you or me.

I cannot ignore the terrible injustices that are happening every day, especially to people of color or other minorities.

In my writing, I try not to focus on myself. Although I obviously give my opinion, it is the books and movies that I review that are important.

Do you know why? Because it is their words that need to be heard, not mine.

I have been in a bit of a reading and writing slump, mostly because I am so busy with work and preparing to visit the US. But seeing the terrible intolerance that has gained traction in my home has given me the push I needed to get back to reviewing international literature and film. I must do what little I can to combat this terrifying wave of intolerance and violence.

Now back to your regularly scheduled program.
Posted by Chelsea at 3:22 PM 2 comments: Links to this post

Email ThisBlogThis!Share to TwitterShare to FacebookShare to Pinterest
Labels: personal 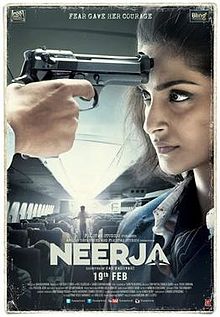 On September 5th, 1986, Palestinian terrorists hijack Pan Am flight 73 while it waits on the tarmac at the Karachi airport. The head purser of the flight, Neerja Bhanot, tries to keep the passengers safe by negotiating with the terrorists and trying to outwit them. Based on a true story, this movie depicts how Neerja became an international hero by saving the lives of most of the passengers and crew, while dying herself.  Meanwhile, we see the emotional fallout at home of knowing that your daughter, sister, or girlfriend is in mortal danger – and there’s nothing you can do to help her.

While this could have easily become melodramatic, the powerful performances of Sonam Kapoor as Neerja and Shabana Azmi as Neerja’s mother imbue this film with the right mix of tension, fear, and bravery to make it one of the most lifelike and emotionally complex films I have ever seen. I think this is the only movie that has left me bawling in my seat at the movie theater, and I daresay you will have a similar experience.


While it doesn’t go into great detail, the movie does explore Neerja’s history of surviving intimate partner violence. After having an arranged marriage, she is taken to Oman by her husband, who proceeds to verbally and emotionally abuse her – finally escalating into physical violence. Part of this abuse is letters sent to her father demanding that he give more money for her dowry.  When Neerja escapes from this terrible situation and returns to her parents’ house, she has to deal with the social and familial censure of her actions. As a woman, she should have been able to accept and adjust to any situation, or so the logic goes. Neerja bravely perseveres in doing what is right for her: getting a divorce, picking up her modeling career again, joining PanAm as a stewardess, and just generally creating a new life for herself.

Read the rest on The Asian Cinema Blog

Posted by Chelsea at 3:51 AM No comments: Links to this post