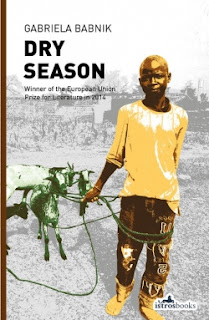 Many thanks to Istros Books for providing a review copy of this novel!

Ana, a 62-year-old graphic designer from Slovenia, has run away to a completely foreign place – Burkina Faso. There she meets Ismael, a 27-year-old former street kid with a history of abuse, and they begin a relationship despite – or perhaps because of - their differences. As Ana and Ismael take turns telling us, the readers, about their complex and pain-filled lives, we wander with them further into the dream captivating them.

This novel plays with the stereotypes of the old white woman in Africa as a tourist and the street kid with a history of abuse. Ana and Ismael both are and are not prime examples of their stereotype. Underneath his rough exterior, Ismael thinks deeply and is widely read. He can engage intellectually with the world around him. He isn’t really the fighting, drug dealing street kid that the stereotype would lead you to expect – although he does get involved with those kinds of activities sometimes.

Ana tells us that she chose Burkina Faso because of its complete dissimilarity to where she came from. But the longer she stays, the more she realizes that this new place is not all that foreign after all; she has had similar affairs in the past (with dark-skinned, younger men) and this seems like a repeat all over again. Or did those other affairs actually happen?

Read the rest of my review at Shiny New Books.

"Gabriela Babnik" from the European Union Prize for Literature

Posted by Chelsea at 9:31 PM No comments: Links to this post

The Ten Incarnations of Adam Avatar by Kevin Baldeosingh 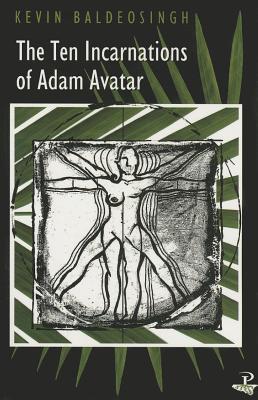 Many thanks to Peepal Tree Press for providing a review copy of this book.

Adam Avatar, a Trinidadian of Indian descent, visits a psychiatrist with a very interesting complaint: he believes he is over 500 years old, having been reborn nine times, and that during his many lives he has witnessed many of the important political and social changes in the Caribbean region. His expressed purpose in visiting this psychiatrist is to present the stories of his other lives and hear the doctor’s opinion on whether or not he is insane.

The psychiatrist reads through the documents that Adam presents, a series of first-person life narratives featuring diverse characters who share some of the same features: piercing green eyes, resistance to aging, and a remarkable healing ability. Their personalities, lives, and even genders vary, but each narrative presents a well-rounded individual in a rich historical tapestry. The magic of the novel arises from the richness of these narratives and their connection with the complicated history of the Caribbean.

Read more »
Posted by Chelsea at 12:37 AM No comments: Links to this post 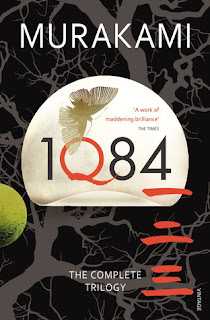 Aomame, whose name means "green pea," has a complicated past and an even more complicated present. When she finds herself in an altered reality, she must determine the new rules if she wants to survive.

Tengo is a cram school mathematics teacher and aspiring fiction author. When his editor asks him to ghostwrite a revised version of a novella, he has moral qualms – but in the end, the story is so compelling that he accepts, unknowingly falling into danger.

In this marvelous trilogy, Murakami takes us into the world of these two lonely people. But what is real? And why are there suddenly two moons in the sky?


One of the things I like most about Murakami’s writing is the way he focuses on friendship. The friendships in this novel feel solid, real. This is something that is not very common; authors have a tendency to focus only on romantic relationships. It is incredibly refreshing to read a deep work about friendship itself.

Aomame’s character is particularly shaped by her strong friendships. One of her very good friends from when she was a teenager committed suicide, which severely impacted Aomame’s emotional state. This is normal and completely understandable, and not something authors emphasize enough. In the course of the novel, another of Aomame’s female friends is the victim of a gruesome murder. When she hears, Aomame cries for days. Importantly, she lets herself cry for days, performing the necessary emotional work to deal with her grief. Then there is her friendship with her employer, the Dowager, a close relationship that is almost familial. Both of them rely on this strong, intergenerational friendship.

Read more »
Posted by Chelsea at 9:24 PM No comments: Links to this post 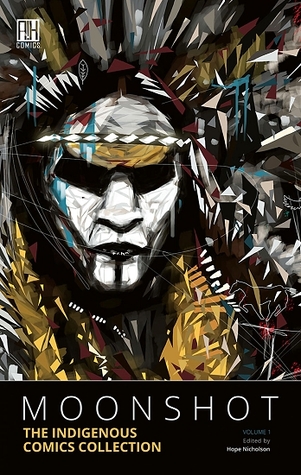 Many many thanks to Alternative History Comics for providing a review copy, and to my mom for sending it to India for my birthday!

I have been meaning to add some graphic novels/comics to my blog for a while now (though I confess I’m a complete newbie to the genre!). When I saw this one advertised online, I knew that I had to review it. Why? Because my research area is Indigeneity, and I have been wanting to focus on Indigenous literature. So this is the first of hopefully many posts about Indigenous literature and movies, broadly defined.

Moonshot is a collection of short graphic stories, products of collaborations between indigenous writers and industry-leading illustrators. The illustrations are in a wide range of styles, and, like any anthology, the quality of the stories themselves vary to some degree - although overall this collection is a very high quality work.

Written and illustrated by David Mack, this excerpt from a Marvel superhero comic (Daredevil Vision Quest series) concerns Echo, a deaf Cherokee girl who has the power to mimic anything she sees. In this section, she remembers her childhood, illustrated in a beautiful scrapbook-like format filled with layers of the child-Echo's drawings and Indian sign language. This story is easily the most beautiful selection in this book, and made me want to track down the original comic.
Read more »
Posted by Chelsea at 12:22 AM No comments: Links to this post