Behind the Painting and Other Stories by Siburapha, translated by David Smyth 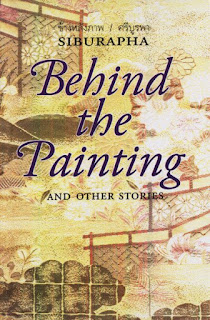 Many thanks to Silkworm Books for providing a review copy of this book.

Behind the Painting is Siburapha’s most acclaimed novel, a tale of the repressed romantic feelings between a young Thai student studying in Japan and an older, married Thai woman on holiday there. According to the introduction, this novel is the best example of  Siburapha’s early writing: romantic stories based on the upper classes of Thai society during the interwar period.

His later stories, however, draw upon his Communist politics to portray the plight of the poor and working classes. The three short stories in this collection provide a sample of his later work, which contrasts with the novel in almost every way. Because of these differences, I will review the novel and the stories individually.


When an elderly member of the Thai nobility contacts him, the young Thai student Nopphon agrees to arrange their travels in Japan, where he is studying. The elderly man is accompanied by his younger wife, Mom Ratchawong Kirati, and Nopphon’s quick friendship with her soon blossoms into love. When he reveals this to her, she refuses to respond in kind and requests that he hide his feelings. However, it is evident that her actions are bound by her difficult circumstances - and therein lies the essential tragedy of this short novel.

There are several important cultural insights that can be gleaned from this beautifully written novel. First, Mom Ratchawong Kirati is stuck between a rock and a hard place: she feels like she must preserve her looks to be liked in the society; at the same time, she is prevented from going out into society because of her rank as a member of the nobility. At this time, nobles were required to act in specified ways that marked their difference from the peasantry - they were not allowed to pursue certain careers, interact with certain lower-class people, travel to certain places or in certain ways, and so on. (I will discuss this further in my forthcoming review of Many Lives by Kukrit Pramoj.) These restrictions and enforced isolation from society prevent her from living as she desires, and prevent her from even looking for love. This leads her to agree to marry a man who is significantly older than her, whom she does not love and who does not love her.
Second, Nopphon’s residence in Japan is fascinating, because it provides an opportunity to see Japan from a different perspective than the English-speaking world is used to. This description is based on the author's own experiences and gives the reader access to the Thai impression of Japan (the girls are beautiful, etc.) from the early 20th century.

Finally, Nopphon's narration specifically highlights the prevalent cultural idea that it is better for upper-class Thai men to study abroad. By studying in another country, they are supposed to learn things that will benefit their homeland, allowing them to improve or develop it in some way. As Nopphon points out, however, this is a very high expectation to place on students who are no more intelligent or studious than their counterparts in Thailand itself. It is not helpful to put them under such stress, and it is not good to expect them to miraculously save the country; doing so, in fact, serves to remove any expectation for improvement from Thai society itself.

One of the best parts of this novel is the narrator’s description of the minute negotiations between Nopphon and Mom Ratchawong Kirati, especially in their mutual pursuit of love. As with most confessionary tales, the narrator here is unreliable: it seems that he may actually have gone further than he’s willing to admit. The hidden parts of the narrative are apparent, greatly increasing the repressed sexual tension between the two.

This novel is very worth reading for the depiction of a deep friendship/love between people in an exotic location dealing with basic incompatibilities – and the fickle nature of this love when they are finally separated. I also recommend it for its discussion of the restrictions on Thai nobility and the cultural ideas about studying abroad.


A rich girl begins to question her parents’ love of luxuries and wonders whether the poor really do want more than they currently have. This is partially spurred on by her friendship with a boy about her age, the very studious son of her family’s driver.

This story hit close to my heart because of the current immigration issues in the US, about which I have very different ideas than my parents. However, I did not think it was very well written; not much actually happens except a girl questioning the assumptions she has held since her childhood.


When a poor laborer falls deathly ill, he needs some money for Western medical treatment. He sends his wife to request a loan from a wealthy neighbor, who has asked for his help many times in the past - only to find that his needs are dismissed and the value of labour itself is called into question. After the laborer recovers thanks to the efforts of his friends, the wealthy neighbor has his own health crisis. When he calls upon the laborer for help, he finds that the poor man is less than willing to lend a hand.

I like the contrast of this story, and the fact that the poor people realize on their own that their labour is worth more than the rich man would have them believe. That was quite refreshing, if extremely, obviously, communist.


In this story, the author examines the situation of a poor family who lives in a small shack and makes a living by driving a rickshaw. This family’s struggles and problems are analyzed and, after the husband talks to an anonymous communist, they realize how their own actions are related to those of the government and the wealthy.

Of the three stories, this one was the most interesting to me. It demonstrates the difficulties of people who live hand-to-mouth, and what they have to do to just keep living. But it also demonstrates some of the joys of their lives: children are given sweets, plans are made to take them out. Their lives are not just about suffering. And then the father realizes that he is also a citizen of the country, and that he has the responsibility to shape the society's future - regardless of his income or social status.

Communism in the stories


Rather than being compelling stories on their own, these short stories really focus on the political ideology of the author. I wouldn't really call them great literature, but they did demonstrate the plight of the poor when it was needed.

The contrast with the novel could not be more clear. Instead of the everyday struggles of the poor, the novel discusses the intimate but repressed romantic feelings of two members of the privileged classes in a foreign setting which only the wealthy have access to. It is interesting to see such a contrast between the works of a single author which are about 10 years apart.

In the end, it was the author’s communist tendencies that got him in trouble: he was imprisoned for several years and later died in exile in China because of his writings against the government. It is fascinating that this man’s best writing contrasts so strongly with his political convictions.

Sorry for the lack of updates over the last month or so. I've been busy helping my husband launch his new business Heritage Walk Calcutta!