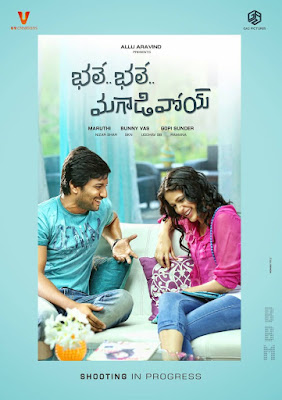 Lucky is a young, good-hearted plant scientist with one major flaw: a mental disorder that makes him get distracted incredibly easily. This interferes with his life in various ways, and now it is interfering with his ability to find a girl and get married. When his father arranges for Lucky to meet the father of a prospective bride, Lucky gets distracted by a series of random events in full view of his prospective father-in-law – leading him to believe that Lucky is a terrible human being.

When Lucky accidentally runs into the girl, Nandana, he falls in love and tries to conceal his problem of forgetting everything. Many of his actions turn into (or are passed off as) incredible philanthropy, and Nandana falls in love with him partially because of his apparent goodness. But how long can he keep this up? Will he ever get the girl?


Lucky’s habit of forgetting things is treated as a disability throughout the film – and not just because he thinks he has to hide it. Throughout his life, his father has told him that he will never amount to anything, or be able to get married, because of his forgetfulness. And it does significantly impact his life - he has trouble carrying out the simplest tasks because he forgets about them halfway, and he has a lot of trouble with accidentally giving away his belongings – including his father’s car!


Once he finds Nandana, who trusts him, he begins to realize that he is more than his forgetfulness. He will never have a mind like a steel trap, but when others understand his problem it significantly improves. Once he has something important to focus on – i.e. someone he loves – he is able to do so. The moral, of course, is that you should try to understand people who have disabilities, rather than criticizing them for what they cannot do.


While many of the comedic aspects of this movie come from Lucky’s memory lapses (such as when he accidentally gives his motorcycle to a beggar…), others come from how his family and friends play along with his attempts to disguise his problem. One memorable scene involves his mother dealing with a marriage proposal from Nandana’s father while Lucky and his father hide in the bathroom. Lucky and his father then have to pretend to be their own next-door neighbors – hard to do when Nandana is introducing the real Lucky to all of her relatives!

Another source of comedy is the truly ridiculous song-and-dance numbers, which play on standard themes for Indian romantic comedies. I need to share this clip with you:

This is just one of the songs that take the comedy to a different level.


Something that I really appreciated about this movie was that Lucky is actually a good person. Yes, he does not mean to be so philanthropic, but when given the chance actually shows the good parts of his character. When he hears that Nandana is sick, for example, he risks the possibility of detection by her father to comfort her.

This is strongly contrasted with her other suitor, a police officer that Nandana is not interested in at all. When he can’t get her by normal means (since she refuses to marry him), this officer becomes incredibly manipulative. He even gets her arrested “for prostitution” so he can “talk her out of jail.” These tactics follow the standard tactics used by heroes in commercial Indian films (like I discussed in my review of the Telugu film Eega, also starring Nani), and it is significant that in this film these are viewed in a negative manner.

Don't get me wrong - this is not a feminist film, and Lucky also does his share of manipulation and stalking. When contrasted with the actions of this police officer, Lucky’s attempts at deception seem relatively innocent: his motive is hiding what he sees as one of his flaws, rather than forcing Nandana to marry him. Lucky does this out of a fear of not being loved. This does not, of course, make it morally sound, and in fact risks painting Lucky's problematic behavior as ok.

While the plot of this movie doesn’t always hold together and the acting is sometimes not as good as it could be, I recommend this movie for its comedy and because Lucky and Nandana are such a cute couple.