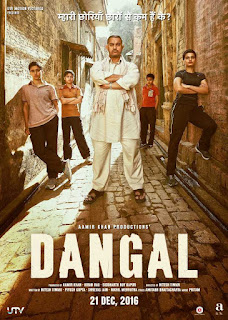 After he is forced by financial circumstances to give up his own wrestling career, Mahavir Singh Phogat plans to train his future son(s) so that they will win a gold medal for India on the international stage. When he ends up having four daughters, he thinks his dream is lost – but then he has the radical idea that girls can be wrestlers, too. After many years of intense training, he manages to bring two of his daughters, Geeta and Babita, to the international level. But will his old-fashioned, village methods work against athletes from around the world?

This movie tells the true story of Geeta Phogat, the first Indian woman wrestler to win a gold medal at the Commonwealth games (in 2010), her sister Babita Kumari, also a gold medalist, and their father who coached them to greatness.


This film does a good job of showing the cultural context and why, exactly, this family is so remarkable. Mahavir and his family live in a village in rural Haryana, India – a state known for its poor treatment of girls, and high rates of female infanticide. Haryana has one of the worst sex ratios of any Indian state: 861 women for every 1000 men in the whole population, and 835 girls for every 1000 boys aged 0-6 years. Patriarchy, especially the wish for male children to carry on one’s legacy, is particularly strong. The movie demonstrates this cultural pressure for male heirs through a humorous sequence, in which Mahavir receives innumerable bits of advice on how to conceive a male child. In the end, it seems to be a catastrophe for the entire village when all of these efforts fail and Mahavir’s wife continues to have girls.

Read the rest on the Asian Cinema Blog