Laburnum For My Head by Temsula Ao 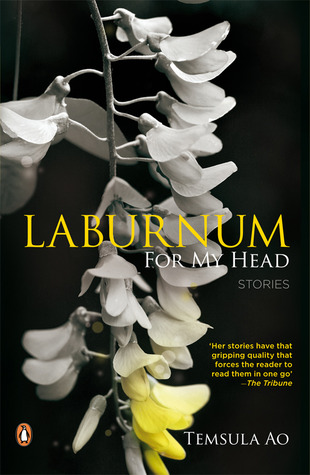 This is a book of short stories by the Padma Shri winner Temsula Ao, a retired English professor at the North-Eastern Hill University, Shillong. In 2013, she was awarded the Sahitya Academy Award based on this collection of stories.

Because this is a diverse collection, encompassing many themes and writing styles, I will give a brief introduction to each.

"Laburnum for my head"

A woman loves the Laburnum flower, but has no success at cultivating them in her garden. She decides that it would be better to have a Laburnum plant on her gravestone rather than an ugly tombstone.

"Death of a Hunter"

The best hunter in the area finds himself, once again, being forced to hunt a wild animal that he does not really want to hurt. He is worried about the creature's intelligence and what it will mean if he kills it.

"The Boy Who Sold an Airfield"

Set at the end of WWII, a young boy makes his way into the confidence of some American soldiers, ending up with some property that he needs to sell.

The normally peaceful people of a village are tired of threats and extortions by the insurgents hidden in the nearby hills. Finally an attack by a group of freedom fighters proves to be the last straw, and the villagers retaliate.

In a series of connected stories, a grandmother, mother, and daughter find their pasts intertwining with the concepts of motherhood and family.

When villagers are forced to give supplies to insurgents, the national army arrests them and accuses them of aiding the enemy. One of the women goes to the army camp to try to convince them to let her husband go.

A woman returns to his hometown only to hear news that her former lover has died - a man who had left her to join a rebel group of freedom fighters and has been killed under mysterious circumstances.

A caterpillar turns into a butterfly in a young boy's sick room.

Not all of these stories were particularly compelling. "Death of a Hunter" in particular was not very interesting to me. I will talk about the common theme of war, especially war between freedom fighters and the army, and then talk about my two favorite stories, "Three Women" and "The Boy Who Sold an Airfield."


Three of these stories - "The Letter," "The Question," and "Sonny" deal with the difficult situation of common people during a guerrilla war. These stories were sparked by a deep understanding of the current situation in the states of Northeast India, where various factions of "freedom fighters" have been campaigning for their own states or to break away from India altogether. Ao's stories address the personal trials of the people who are not directly involved with these movements, but whose lives are severely impacted by the situation around them.

Of these three stories, the first two represent the ways that these ordinary people find themselves between a rock and a hard place. While they are themselves trying to make a living, they are forced to feed and supply the rebels as well. Sometimes - often- there are not enough supplies to go around, and the freedom fighters take what little there is, "for the cause." On the other hand, the army suspects all the local people of being in alliance with the rebels. Whenever the rebels take food or other supplies from the villagers, the army tends to punish the villagers for supplying the rebels. If they resist the rebels, they may be killed; if they resist the army, they may be killed or imprisoned. What do you do in this situation? Ao asks. These people just want to live their lives in peace.

"Sonny" confronts this issue in a different way. The narrator's former lover has died in violent circumstances. But despite how much he means to her - despite how much she still loves him - she cannot express sorrow or go to the funeral. That would jeopardize her chances of employment and possibly her life as well, by admitting publicly that she still has an emotional link to this man she loves. And she is hurting, and has been hurting for a long time, because he chose "the cause" over her.

"Three Women" depicts three generations of a family and their connections - both in the past and in the present. It shows the things that women have to deal with, and how they can cope and succeed in life despite their struggles.

The youngest member of the family is always being teased for being dark-skinned in the normally light-skinned community. It turns out that she was adopted; her mother, who was working as a nurse, decided to adopt her after her biological mother died and her father rejected her. When given the choice between adopting the infant or keeping her job, she decides to take the baby home to her parents' house.

The mother was working as a nurse because she had decided not to marry. For reasons unknown to her, her fiancee had cancelled their wedding plans; as a result, she chose not to marry, instead studying and then working in a government hospital.

The grandmother knows more about these cancelled wedding plans than she cares to let on. But she does what she can to help raise the baby. Her relationship with her granddaughter becomes even deeper when the girl becomes pregnant and they have something new in common that the mother has not experienced - the joy and pain of carrying life within you.

This is just a beautiful story, and my absolute favorite from this collection. My other favorite is very different.

"The boy who sold an airfield" depicts a relatively obscure part of history: the fact that American soldiers were deployed to Eastern India during WWII as a precaution against Japanese invasion. Humorous and sad at turns, it gives an interesting depiction of how the local people were affected by the strange camps of people who suddenly appeared during the war. And who owns those abandoned airfields anyway?

Overall, this is an interesting and varied collection of stories that gives a feel for Northeast India. I recommend "Three Women" and "Laburnum for My Head" in particular, as those stories have the most literary merit. The rest of the stories primarily give cultural information. Sometimes the writing itself felt a bit stilted or stiff, but I got used to it after a while. Recommended if you're at all interested in Northeast India or the literature of warfare. And I recommend that everyone read "Three Women."

Laburnum For My Head is available from Amazon US, Amazon UK, Amazon IN, and flipkart.