The Gilda Stories by Jewelle Gomez 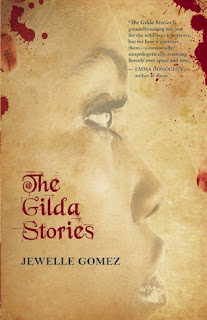 I picked up this book on sale while visiting Borderlands Books in San Francisco this past winter. After spending so much time in India, where speculative fiction is not big and it can be hard to find anything beyond JRR Tolkein and Game of Thrones, Borderlands felt like paradise. I asked the staffperson to recommend some diverse books, since I did not usually have access to such a collection - and this is one of his recommendations. Thanks to Borderlands Books for recommending this book.

In this episodic novel, an escaped slave is rescued by two vampires who run a brothel together near New Orleans in 1850. When she chooses, they change her into a vampire as well. What follows is 200 years of exploration of herself, her found family, and what makes her human - or not. As a black woman living on the margins of society, how does she experience social changes over time? Where (or who) is home?

The best part of this book, for me, was the emphasis on creating a family. This is not just a romantic proposition, of finding one or more partners to live with over time; this group of vampires literally creates a family based on whether individuals want to join them and have the aptitude for living in a moral way. While some of these new family members might be brought in as lovers (i.e., the longest-running couple in the book, Sorel and Anthony), others are brothers, sisters, or friends. Lovers do not always stay together for long periods of time; according to their own wishes and interests, they go their separate ways, always knowing that they are part of a family that they can return to at any time. This vision of a found family is empowering: while they miss each other acutely, each individual's wishes and interests are respected, with the knowledge that they always have somewhere to come home.

Gilda's search for a family is also wrapped up in her search for a place. She constantly tries to create her own place of comfort and familiarity, even though she always knows that she will have to move again. Unlike other members of her family, she does not enjoy traveling - partially because of traumatic experiences in the past, and partially because she wants to enjoy staying in one place as long as possible. This is why she carries a collection of personal items with her through the years: she feels she can make a home for herself with her quilt, her desk, and some mementos of long-dead mortal friends and family. It is this vision of creating a home and a found family on the outermost margins of society that most appealed to me.

The fantastic aspects of this book were interesting. The vampires can move around - and even walk through daylight to some extent - if they just keep some of their native soil on their person at all times. They have creative ways of doing this: embedding some dirt into the soles of their shoes or in the hem of their clothes, for example. While they don't eat food, they do drink a lot of tea and alcohol, which seem to create them same effect as on humans. The most empowering is the idea of an exchange: for the blood they take, the vampires provide a solution to a problem that the human is worried about, or a happy thought, or something else that is good and useful for their mental lives. All in all, this is a unique take on vampires that brings this book beyond the somewhat standardized version we are familiar with from the last few decades.

I want to finish this review with a few words about my preconceptions about this book. In the cover blurb of the version I read, it states that, besides being a classic of lesbian literature, "The Gilda Stories has endured as an auspiciously prescient book in its explorations of blackness, radical ecology, re-definitions of family, and the erotic potential of the vampire story." If you read that last point and expect this novel to be full of erotica, you will be disappointed. While sexual activities (between women and one with a man) are poetically implied at numerous points, there are no explicit sex scenes in this book. [Trigger warning] There are a few mentions of rape or the threat of rape, as well as a number of scenes involving street harassment of various kinds. Similarly, there is not much explicit discussion of radical ecology: the environment mostly plays the role of a distant backdrop for the action, even when environmental collapse causes the breakdown of human society in the future chapters. This is mostly because of Gilda's lack of interest: she is happy with her own little sphere, and doesn't often bother with things outside of it. This is not true for the other vampires; Bird, for example, is constantly working as an environmental activist in various parts of the world. While I greatly enjoyed this book, I feel that it would have been better to not have these expectations going in.